Microsoft released SQL Server 2008 on Wednesday. The new database software is a continuation of Microsoft’s efforts to bolster SQL Server’s credibility as a highly scalable database and the cornerstone to Microsoft’s evolving “data platform.”

“If you added up all of our investments in SQL Server 2008, it was data warehouse scale that got the highest level of investment,” Ted Kummert, the VP of Microsoft’s data platform and storage division, said on a conference call with reporters and analysts. Microsoft already claims numerous deployments of multiterabyte, heavily accessed databases and has largely gotten over its reputation as a system that couldn’t scale, but the company continued that focus in this release. 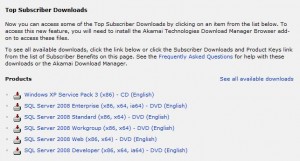 "Enjoying the tool quite a bit. Much easier to use than scheduling in orchestrator."

"Its exactly what I need especially to provide admins not familiar with scom (and even those that are!) a quick and easy method of applying maintenance mode."

"Great work I must say. This is by far the best MM tool for SCOM ever."